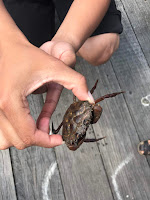 Hey y’all, I’m back with an update on the "Save the Harbor, Save the Bay” summer program. This week my crew and I were still installed at the Boston Children’s Museum where we raised awareness of the nonprofit organization and prompted people to explore fishing and touch crabs to get a feel of the Marine life and excitement. Throughout the week, we caught an abundance of green crabs, a few perches and striped bass, and a few maturing spider crabs. One thing that was exciting this week was during break; my SHE and I were sitting at the table when I looked over and saw a fishing rod in the water, bouncing up and down and it almost got lurched into the harbor. I ran over and grabbed it, calling out to my SHE to grab the net. We ended up catching a huge striped bass within a few seconds.  Another weird thing that happened this week was that the Boston Harbor's cleaning crew was driving around and we told them that there was something in the water because we kept losing our fishing hooks and weights. They ended up going far into the harbor just to come back and bring us a rusty chair full of seaweed, barnacles and other aquatic life. And there was another time where the job became really slow, since we had no visitors, and we resorted to picking up trash from the bay with our hooks and nets we ended up taking out plastic wrappers and bags, containers and other weird objects. That’s where plastic pollution comes into this blog about and that will never happen as long as I’m around.
In summary, plastic pollution is a "global problem that is growing exponentially due to an increase in both consumerism and manufacturing of certain products"(Griffin and Wilkins, 1). Much of this comes from the ease of disposing plastic products in the water and it has greatly contributed to its amount of plastic pollution. Specifically in the Boston Harbor, plastic pollution is not high in numbers but it’s enough to alert the public about how serious the problem is. Over dues time, plastic products can seep toxic chemicals and waste into the water, and as we know water is recycled and purified for consumption, so humans would have a greater risk of retrieving cancer, organ damage and abnormalities from contaminated water. “Save the Harbor, Save the Bay” can help reduce plastic pollution by advertising to avoid dropping trash in the water, exposing people to the dangers and consequences of polluting the water, and always being on the lookout for trash and picking it up on site.

The proper and most popular way of disposing of plastic bags is to REUSE and RECYCLE!! Taking used items such as plastics bags and turning them into something new wou
ld positively impact the environments' future (Krishna, 3). Recycling the bags in the correct bin also helps reduce the pollution. And I bet there are countless more methods to save the Earth but we do what we can to do our part. Come on guys, let's be 'plastical' about this.
Until next time, Flo!