My first week I was working at Spectacle Island with the cruise. There where more than 300 people on board and amongst them one of my friends from school was there with her camp. At Spectacle we hosted different activities with the kids. We had fishing, sport activities, touch tanks, and swimming available for them. I was stationed at the fishing activity where we welcomed groups every 20 minutes starting at 12pm up until 1:20pm. Most kids were first time fishers and they learned pretty fast. This boy I asked if it was his first time and he said no, he said that he goes fishing at his families summer house which was interesting because he was so little and he knew how to fish. When crabs were caught there were a few kids who were terrified of seeing them and started yelling but others were eager to hold the crabs. Most of the crabs caught we put them into a touch tank were kids and their adults gathered around to touch them. 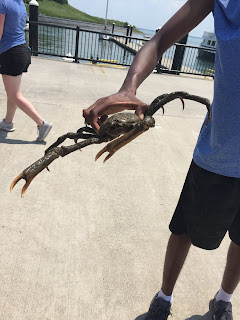 The biggest crab caught of the day was a spider crab. As you can see to the right. There were bigger crabs that we started to rail up but they were too heavy. These crabs can grow 9 inches from claw to claw. You can find them at the Bay bottom, rocky shores, harbors, eelgrass beds, and pilings. It has 9 spines running down its back. Spider crabs have poor eyesight but their tasting is sensitive and usually eat algae and detritus. They are not as violent and strong as other crabs, but still hold their own!

Another common crab we caught was the green crab. The green crab has 5 spines behind each eye. These crabs eat juvenile soft-shell clams and oysters. It eats about $44 million of shellfish each year. They grow to about 15 inches which isn't that big. They arrived in North America on the European ships in the 1800s. Some of their species have been found south of Nova Scotia, Canada.

On this upcoming week, I hope to catch different sea creatures and not just crabs. There are thousands of different species in the water and catching different ones will broaden my knowledge on the different types that inhabit the area. My 4th was spent at the beach of CT with my uncle's family. I'm pretty sure they didn't allow grilling on the beach so we decided to grill in the parking lot. When you're hungry you're not you. 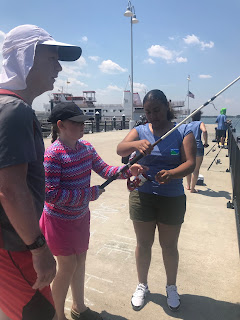