Hello again, and welcome to my 5th blog post. 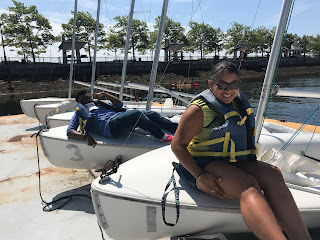 This week I was at Piers Park, which was nothing I wasn't used to, but I was with a new group of workers this time. I found myself interacting with them in a really enjoyable manner. I felt like, although I had a new group of Coworkers this time consisting of Jasmine, Sebastian, Flo, Kaya, and Fatima. Luckly, I felt like I could attribute myself and fit right in with them. We easily bonded due to the games we had played with one another such as freeze tag, and knee tag. Those were really fun game. I felt like this when I am at a lot of the other sites, such as the Boston Children's Museum. I interact with most of the people at those sites whether they are kids, JPAs, LHEs or SHEs. I interact with them individually and differently. For example, I interact with the kids at all the sites like at Piers Park, when I, along with my other coworkers, organize a game, we have to go over how to play the game in a well-constructed manner. Through these activities, I have learned that you have to be careful with the games you play because next thing you know they're going to be confused and less interested in the game. Another group I interact with is my LHE and JPAs. I associate them together because I act the same with both groups, meaning that I know when it's time to have fun with them and work hard with them. For example, when I work at events with them like the one at Hull Illumination that I did on Saturday, I interacted with my JPAs and LHEs by mixing hard work and fun. I knew when it was time to chat rather than fish print, and I knew when it was time to fish print and work rather than talk. That's an important learning skill when it comes to interacting with my JPAs and LHEs.  As for my SHEs, I treat them nearly the same as my JPAs and LHEs, but I do know I have to listen to them because technically they are the boss of the site I am at. However, they are human, so I shouldn't restrict myself all because they can tell me what to do at the sites. They are usually understanding people as well and this year had taught me that considering I have been with a lot of SHEs. 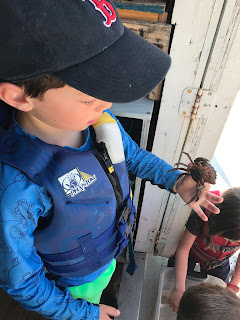 Although I do interact with the kids and my other coworkers, sometimes it can be a challenge dealing with them. For example, sometimes you feel like you're pulling more weight than other people. As if they don't feel like working much on that day. During this moment, you have to know how to communicate with your coworker, by asking if they could help you work or just tell them politely to get back to work. That is what I believe to be the best way of talking to you're coworkers if you're having an issue with them. Other than this, I find myself having the most fun with everybody whether it's my coworkers or the kids at the sites. I remember being at pier park and playing everybody's it and it was a fun game to play because everyone would be so invested in the game and there would just be a lot of laughs around. It helps you get to know all the kids.

One moment that I will always remember, in terms of the summer was the event at Hull mainly because I had a really good group--they were so cheerful. I had Tessa as my SHE, Patrice as the LHE, and me, Damani, Jay and Jasmine as the JPAs, They were a really good group and made me feel at home. Especially since I was familiar with all of them at this point of the summer. Everything that was at the event made it spectacular, from the sunset to the fire show, to the illumination of the lake. It was such a good sight in my opinion and something I probably won't forget for a while. It was a unique event that I never had done before in the 3 years I have been at Save the Harbor.

I can't wait to Pacifically write to you again!
~Kamal
at 9:51 PM