First week at Boston Children's Museum was filled with new unforgettable moments! As a team we are enthusiastic, helpful and patient. My favorite memory of this week is when the coast guard came to help us cut the line from the bottom of the water. It was pleasant to see the Save the Harbor staff be friendly to the men/women protecting our safety.

We caught two friends this week, a spider crab and a striper- both in the same day. First the spider crab came, it was enormous and the staff was thrilled to catch it because they were waiting all day to get him hooked to the rod. They kept catching it but the spider crab would release the food the second we tried to reel him up. That was a pure test of patience! We kept the spider crab in the tank, it attracted many people to come up to us and touch or hold the spider crab.

The Great Spider Crab found in the Boston Harbor is quite interesting, they have poor eyesight and have sticky hairs covering their body for camouflage. They live at the bottom of the harbors in the North Atlantic and Arctic oceans. The males grow larger than females stretching out to nine inches from claw to claw. Their diet is minimal they eat fish, algae and other plants. 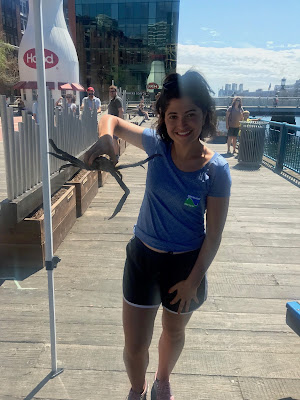 The striper that we caught was HUGE! There was a little boy waiting oh so patiently to catch a fish, meantime I directed him to go see the crabs in the tank. The second he turned around I was holding the rod and I felt something pulling. With the help from the staff we got the net and we caught a striper!

Stripe Bass are found along sandy beaches, in shallow bays or along rocky stretches. They eat anchovies and croakers. They usually grow up to 59 inches and weigh up to 77 pounds. The largest striper bass ever caught was 125 pounds in North Carolina in 1891.

Both of these catches were eye opening to what marine life lives in the harbor and how exercising patience could give you a rewarding outcome.

I'm excited to learn more about the species of crabs and fish that we possibly will catch in the harbor this week. Hopefully the fish had a good bbq this weekend! 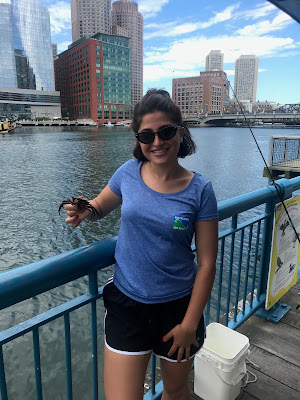