Fighting Pollution is the only Solution!

Hello, and welcome back to Kamal's Blog! 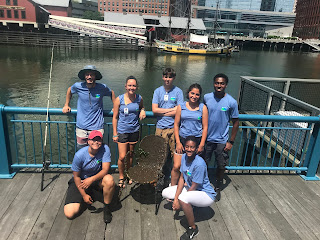 This was my second week at Children's Museum and this week was pretty mundane and was similar to the other week ive been at the museum. This week was pretty slow because there were a lot of moments where crabs would not come into the crab traps and there weren't really much fish on the fishing rods either so we had to use what we can. There was a moment where we caught a pretty big and keep able striped bass. There was also a day on Wednesday where I went a boat to fish with other kids and teens, in which on the boat we had caught a lot of fish and taught people how to use to fishing rod. Afterwards I was back at the children's museum. Despite the slow days, my group/team members really make my day despite the day having a fair share of ups and downs. 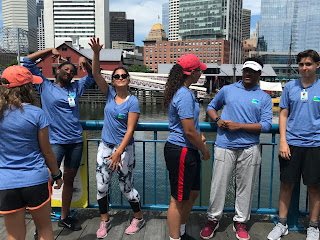 I have seen multiple traces of plastic pollution in the Boston harbor. When I am working at the Children's Museum, you see all the plastic that people have dumped into the harbor like gloves, bottles, plastic bags and many more things. Although we would try our best to Save The Harbor by cleaning it up, due to what our materials are it can sometimes be difficult into picking the waste out of the harbor.I remember one day during my week, a chair was pulled out of the water and I had to pull a plastic bag out of the water with a fishing rod. Plastic and trash in general that ends up in the harbor can harshly affect us and marine life as we know it. For example, there is a lot of trash in the ocean even to the point where there are actual trash islands forming in the pacific. The trash and pollution that forms harms the marine life and plants that reside in water. It degrades plant life and kills animals such as sea turtles and other wildlife.

Plastic/Trash Pollution not only harms animals and plants alike, but it also harms humans. If thought about, the pollution that is put into our water is in the same water that we drink and use in our everyday lives. It harms us on the inside in the worse ways possible, which even gives us diseases and other harmful things such as that. There are multiple ways we can all help clean up the harbor by using the recycling bins that are all around Boston as well as finding any trash or plastic in the water and picking it up and placing it where it belongs. Also reducing the use of plastic bottles can help a a lot because all those plastic bottles often just get tossed in the ocean. Personally ill encourage my friends, family and others by trying to convince them to not buy plastic bottles and always remind them to throw away and plastic into the recycle bins and any trash into there designated bins.

We need to Save this World not ruin it, so lets come together and "Save the Harbor and Save the Bay"
~Kamal
at 10:29 PM