We started off this week with a fun staff enrichment day where we went kayaking on the Fort Point Channel. While kayaking, we picked up the trash that was present on the channel and directly participated in the cleaning up of the harbor. On Wednesday, we went to Spectacle Island and caught not one, but three skates! At first, we were scared but after catching one for the third time, we could efficiently take the hook out of its mouth. The next day it rained, but it didn’t stop us! While one group did fishing, another group did beach walks with the kids and looked for beach glass. We found some pretty amazing pieces including a part of a tea cup and a rare marble. 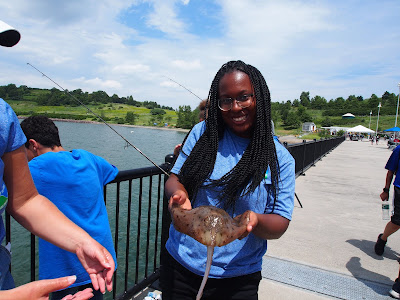 Spectacle Island, from its dock to its beautiful beach glass, has so much history. In the beginning, pilgrims used the island as a quarantine hospital for smallpox patients. During the early 1800s, pilgrims saw the island as an escape and built resorts used for gambling until it was closed down for illegal behavior. Soon the island was industrialized and turned into a horse rendering plant during the 1850s. Many other factories also were on the Island but all closed down when the island became the official dump in the 1920s. 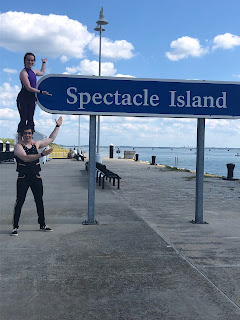 Beginning in the 1920s, Spectacle became the official dump for Boston and forty two surrounding areas. For four decades, thousands of piles of trash were dumped on the Island. The dump was closed in 1959 but remained public health hazard and exposed the harbor to many harmful substances. During the 1970s, the government tried to change the island into an area for recreation and conversation but the park departments did not have enough funding to support the reconstruction of the Island. Not until the early 1990s, after people used the dirt from the Big Dig to fill the Island. 3.7 million cubic yards of dirt from the Big Dig was dumped unto the Island. After the dig, the island grew to about 114 acres and rose to about 55 feet higher, making it the tallest island in the harbor. With the new soil, trees, bushes and grass could be planted. New hiking trails and people of Boston were able to enjoy the beautiful Island. The island officially opened for public use in 2006. The generation of today does not realize how lucky we are to be able to enjoy the Spectacle Island. Only a few decades before, it was an eyesore to the people of Boston. Today, Spectacle is a part of what makes the city beautiful and is enjoyed by everyone.

Catch you on the harbor,
Tia