What Goes in the Ocean Goes in You!

Week three, the time is fishing by!

This week at the museum was a bit slow, but our high energy group didn't let that stop us from learning and bonding. On Tuesday, we weren't having ANY luck with catching crabs or fish.  From 10-1 we hadn't caught a single thing. During lunch Flo and I stayed outside and had left a pole casted in the water. Flo had realized that the pole was bending, I ran and got the net and we caught a striped bass. It was thrilling to have waited so long and catch it during lunch. We collected a lot of garbage from the channel this past week, we bonded over card games and creating our own handshakes. 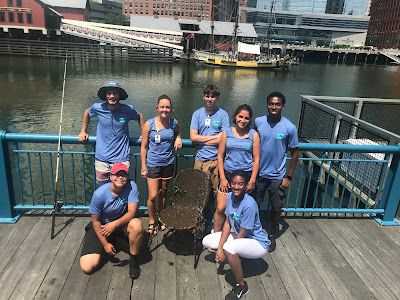 The garbage we see in the channel heavily influences myself and all the staff in my group, quite often we see garbage bags, bottles, and paper in the water. We really strive to collect it and toss it in the recycling bins, as we say, "WE ARE SAVING THE HARBOR" every time we catch garbage. This week, we had a low tide day and discovered a chair in the channel, we brainstormed ways to get it out of water, but it was unrealistic.

The next day, with the help of two young men working for the Boston Line, they were able to get the chair out of the water. The Boston Line's day consists of collecting garbage from the Boston Harbor, seeing their garbage bin filled was disheartening. That's when it hit me. People don't realize that we only have one Earth and we need to work together to keep it around. Surfrider Foundation says "recent studies estimate that fish off the west coast ingest over 12,000 tons of plastic a year". If you eat fish, consider that what goes in their mouth, goes in yours too. 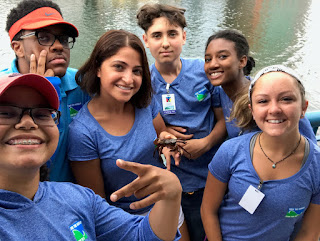 We learned that the flounder fish, caught in the Boston waters in the 1980's, had liver tumors caused by sewage pollutants. Now, the flounder fish are exceptionally healthier, proving that cleaner waters can lead to healthier marine life.  Just as individuals helped to clean the waters of the Boston islands, we can enforce recycling and raise awareness on the direct and indirect effects of being a litter "bug" on human and animal life.
I always say the bottle you recycle or the garbage you throw in the water will change the future for your children; and we can all be real here, the children are the FUTURE.

If you have time to check social media, you most definitely have time to take the extra step to find a recycling or garbage bin.

YOHOE (You Only Have One Earth),
Katerina