Summer at Save the Harbor

Hello, Again.
So my week was pretty fun for me this week, I had really good team members that made the site I was at more fun than it already is. Overall for the days, I've been at the Children's museum its been interesting and incredibly hot as well. Despite that, the days I have been at the museum has been going well and exciting. 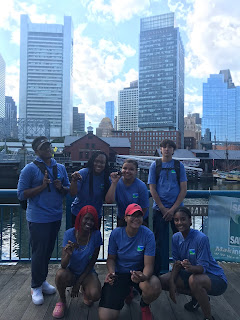 The first day was pretty mundane, overall it was just us getting us used to what we had to do and how things were supposed to happen while at said site. We also had to get used to each other and our personalities. The second day was very interesting, We had caught many things during our time over there varying from Spider Crabs to a huge Striped Bass. Ironically, when I was there during the summer in the past 2 years I hardly seen any fish caught on the line and If we did actually get a fish it would be all the way near the end of April but on the first week of actually working at the site, we end up getting a striped bass that was at least 15-17  inches long. It was quite a sight to see. However, Unfortunately, there was no space in the touch take so we had to throw it back in. Funny enough before we had caught that striped bass we caught a spider crab. That spider crab that we had caught actually took us a long time to get, meaning that my other coworkers tried very hard to get one spider crab because they kept coming onto our lines. Eventually, after lunch, one of the kids that stopped by had grabbed a spider crab on a fishing pole. which was such a cool moment because it was one of the biggest ones I have seen in the past years I have been here. The third day was pretty chill but incredibly hot and considering that we didn't have our tent with us but overall we just did the same things that we usually did. 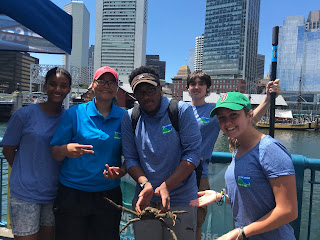 Speaking of the Spider Crab, did you know that a spider crab doesn't harm humans, unlike other spider crabs that tend to do so. They often span from 10 to 12 inches long and are common in most areas in the sea. lives in the North Atlantic and Arctic Oceans reaching from Labrador to Rhode Island. It is an invasive species and It lives on the rocks and sandy bottoms in the water from 50 meters down to 500 meters. They feed mostly on algae. The other foods they eat include mollusks, worms, other crustaceans, fungi, and bacteria

The striped bass has a Common mature size is 20 to 40 pounds and can span from around 12 to even 50 inches in length. It can be found all along the Atlantic coast and in areas around Rhode island. They feed on a wide variety of prey fish including alewife, and anchovies and are most active in the night time. As the name suggests the Striped bass is full of stripes making them different then the normal fish.

I am excited for next week because it is a new week with new things to discover and learn. I think I'm going to have fun for this week and even beyond this week due to the friendships and teamwork that comes with this job. Hopefully, we are a bit more prepared this time, unlike last week where we weren't as prepared for much. All though that was a set back that may happen this week I won't let that get me down and keep myself in a positive light.