it aPIERS to be a skate! 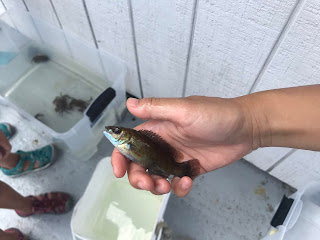 Welcome to the latest updates from the Piers Park/Courageous crew! This week we caught a bunch of new critters, which was extremely exciting. On Monday and Wednesday at Piers Park, we caught a few cunner (a type of small fish) in our crab and fish traps. We also found a sea star stuck to some seaweed during low tide!

On Tuesday, Courageous Sailing Center let us check their lobster trap, and there was a lobster there! We put rubber bands on its claws temporarily, to touch and hold, before taking them off and releasing the lobster back into the ocean. Unfortunately, it was too small to cook and eat... And then on Thursday, one boy at Piers caught a skate while fishing! This was very exciting for not only the kids, but also for us, since previously we have only caught crabs on fishing poles! 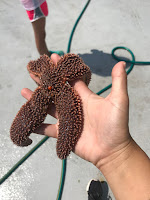 This week we also taught our first "real" lessons. Our biggest one being a lesson on the various crab species found in Boston Harbor, including which ones are native and which are invasive. The kids got to learn how to identify European green crabs from other crabs, and how to identify male versus female crabs. After our lesson, we all learned the proper technique to holding a crab! I was very impressed by the kids' previous knowledge, especially considering the Piers kids are between the ages of 6 and 8! 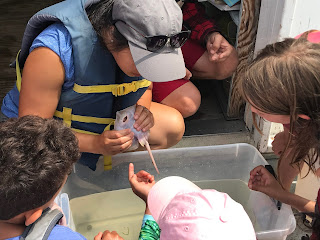 We also had the opportunity to share some facts about pollution, and the importance of keeping our oceans clean. While kayaking, some kids began to pick up trash they found by the dock. One boy even caught a plastic bag on his lines and excitedly explained, “LOOK! I caught a plastic bag! I’m saving the Harbor!” Although a broad statement, he was not wrong to say that he was positively making a difference. Every little bit helps! It was exciting to see how enthusiastic some of the children were to take action to help keep Boston Harbor clean. If you're interested in learning more about the devastating effects of pollution and plastics in our oceans, watch the documentary A Plastic Ocean! Very informative and shocking.


CATCH ya next time, fish friends!