All Hail The Fishing Chart 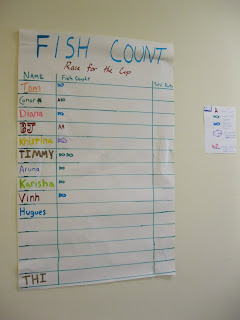 Yesterday, after much discussion, my comrade Tommy and I decided to head back to the office after our fishing trip and create a system that could effectively chart and record the fish reeled in by the Save The Harbor Save The Bay Youth Staff. Previous years had been mired by shoddy reporting and tall fisherman's tales. We sought to correct these shortcomings so that the end of the year.....there would be a champion angler. Thus we estabblished the following: An assist counts as one point. This entails the staffer either setting up arod and the child catched as fish within two casts, the staffer casts the line out and someone else reels in the fish, or someone else hooks the fish and that said staffer reels it in. Any small/common fish that is caught counts for two points. A stripe bass that is 22-30 inches counts as three points. 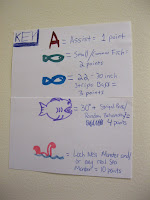 And lastly, a striper or any other leviathan that is over 30 counts as four points. The chart where we record our data is currently posted on the wall near the office water bubbler. As of now, Kristina with her 35 inch stripe bass and Timmy with his skate and cunner are tied for first with 4 points a piece. I am in a four way tie for second with Tommy, Diana, and Vinh with 3 points each. Below us are several staffers with 2 points. Its anybody's race and all I can say is, "may the best angler win"........and I plan to.

Conor... Despite your ill-sighted claims of being some sort of master angler, we all know I'm the best and most experienced. I am glad we will be able to put this heated debate to rest once and for all.
Like they say, a little friendly competition never hurt anyone... unless of course you're Conor, in which case losing to me will probably hurt a lot.
In all seriousness, I am glad we are doing this because it should inspire the staff to catch more fish. This, I believe, will give our harbor explorers the most exciting summer possible (which is really what we are all about).