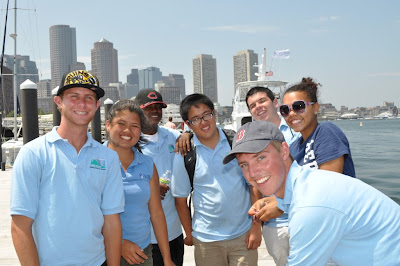 On Thursday of last week, I had the chance to go fishing…with a former Boston Bruins player! I woke up bright and early and headed out to Fan Pier where the rest of the staff would rendezvous. Heading down to the pier, I was pleasantly surprised to see all of the senior staff, including Bruce, Patty, and Matt there on the pier. Everyone greeted one another, and then the staff was treated to breakfast, which included muffins and peaches and juice. After everybody had their fill, Bruce then took this opportunity to lay out the rules of the friendly tournament, and sort the junior staff into different boats. I was placed into a boat with Tom Regan and Kristina Acevedo. We greeted the captains and then climbed into the boat, fondly named “Miss Blue.”

Heading full speed out into the Harbor, our captains stopped to trawl niner lures, which are a set of nine lures, hence the name. Soon, one of the fishing rods started to tug, and Tom took command. He successfully hauled up a 27 inch striped bass, and after a few photos to commemorate the moment, the bass had to unfortunately be released as it did not exceed 28 inches. However, it was supposedly the first catch of the entire tournament. A while later, another of the rods started to tug, and Kristina reeled in a 35 inch striped bass! This behemoth without a doubt was going to win. Following this catch, I also caught a 24 inch striped bass, although it too had to be released as it was not big enough to be a keeper. This occurrence marked the first time I had ever caught a fish! As David Coffin always reminds the kids going on the All Access trips, “Do something you have never done before.” I am proud to say I have finally.