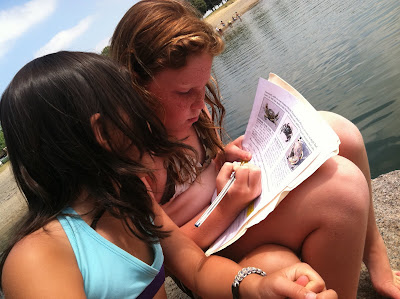 Many of the thousands of young people that Save the Harbor / Save the Bay’s youth environmental education programs serve each summer haven't had many opportunities to interact with marine science first-hand. But on ’s rocky shores and sailing center docks, they can be heard squealing with delight as they catch a minnow in a dip net or hold a lobster for the first time. By the end of each summer, and often just by the end of one day, they can explain more about the intertidal zone and the anatomy of a crab than the average college student. It’s truly amazing how much our children and teens can learn and retain about marine science when they’re having fun. It's what we strive for here every day!
In Summer 2010, the 9,400 kids and teens in the Boston Harbor Explorers and youth programs had the unique opportunity to take their exploration of marine science one step further. They didn’t just transform into individual budding scientists, but became crucial components of a network of thousands of “citizen scientists” across the region through a brand new initiative of Save the Harbor’s youth curriculum. Dr. Judith Pederson, a great friend of Save the Harbor and a professor with MIT’s Sea Grant College Program, enlisted the help of our youth program staff and participants to gather scientific data across the Harbor about its marine wildlife, how its water quality changes from day to day, and how its marine environments differ from location to location across our magnificent natural resource.
And this summer, a new year of Harbor Explorers are joining the effort -- and the fun!
The goal of Dr. Pederson and her team's research tasks is to gather data regarding the abundance, density, size, and gender of invasive crabs on ’s shores - specifically Asian Shore crabs. Using predetermined measurements for a sample area, the kids and teens choose a section of shore at random and collected the crabs they found within the limits. Everyone had a blast chasing the crabs as the scurried under rocks to evade capture. After investigating each crab’s species and gender once it was caught, measurements of its carapace, or body, were also determined and recorded. Each new day our explorers got to analyze how their “crab count” results changed based on the weather and the tides. But most of all, they got so excited that their new role as citizen scientists let them get their hands on so many critters in the process.
The benefits of Citizen Science extend even farther beyond recreational and educational benefits for Greater Boston’s youth. Each of our Citizen Scientists gave MIT researchers another pair of eyes and hands to observe and record new data, making it possible for a just a few researchers to collect large amounts of data and study huge stretches of coastline. Additionally, history has proven to us that some of the most interesting discoveries have been made not by scientists, but by regular citizens volunteering to be a part of understanding our world a little better! So our Harbor Explorers are keeping an eye out for new and unfamiliar things too!
Save the Harbor’s thousands of youth this summerare learning an important lesson: you don’t need a lab coat or beakers filled with brightly colored chemicals to be a scientist. All you need is the eagerness to explore and analyze, and, if you’re lucky, the chance to be part of something greater.
Happy Crab Counting!
Michelle Palermino
Citizen Scientist
at 11:53 AM