Nothing Beats a Cool Gadget! 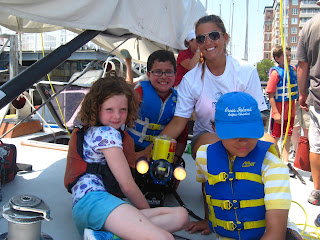 One thing that will get me as excited as the kids I’m working with this summer is a cool toy. This isn’t any ordinary toy. It’s a remotely operated vehicle (ROV) equipped with a camera and grabbers. Like the kids at Courageous Sailing, I was trilled to see Rachel, the founder of the Rozalia Project, drive this little submarine with ease. I watched the ROV go up and down from the surface to the harbor’s floor to pick up and collect several pieces of trash. The trash included many aluminum cans and plastic bottles with the occasional object that we couldn’t tell what it was. We even came across a chair, though we weren’t able to retrieve it because the ROV wasn’t strong enough to bring it up. 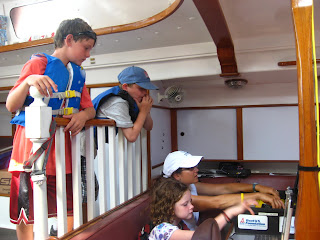 While the Courageous sailors were out doing other things, I spent time getting to know Rachel and the program she had founded. The Rozalia Project, named in honor of Rachel’s grandmother, is based on a beautiful sailboat that is equipped with this ROV to pick up trash out of the harbor and along the east coast of the United States. The sailboat they use is called, American Promise, and was once used to set a world record. A young man sailed it around the world in the 80’s alone in about 150 days and beat the world record at the time by about 60 days. I’d say that’s pretty darn cool if you ask me! Now it’s used for something equally awesome and I hope to keep in touch with the project to see how they are doing.