Mr. Lobster and his Friends 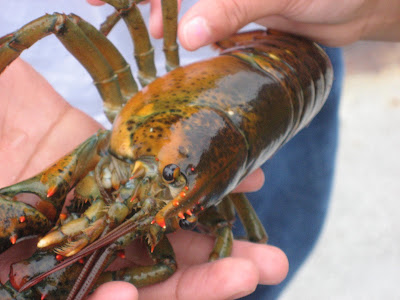 Today Sarah, Karrisha, Mekhi, and I were welcomed with open arms at Wollaston Beach. The moment we stepped foot on the beach, a reporter from the Patriot Ledger immediately wanted to interview Sarah. Our touch tank was a big hit not only with the children but also with the adults. Even though our touch tank only consisted of a lobster, everyone was excited to touch and hold him. Dylan, our first visitor, had the chance to name the lobster Mr. Lobster. The kids were skeptical about touching Mr. Lobster but some worked up the courage to even hold him. Because of the extremely hot weather, the Save the Harbor crew had to consistently change the water, but luckily Mr. Lobster's new friends were kind enough to help us out. Meeting Mr. Lobster was not the only activity that Wolalston Beach had. There was a moon bounce, face painting, music, and free drinks and slushies, and kite flying. DJ Kevin hosted a bunch of games and dance contests for the children, and he even gave away some prizes. Our very own Karrisha even participated in a quick game of "Kevin Says". During the event, we also met some of the members from Friends of Wollaston. Before this event, I had no idea how much of an impact Save the Harbor Save the Bay had on its surrounding communities. Wollaston Beach Kid Fest was definitely a great way to celebrate Save the Harbor's 25th anniversary.