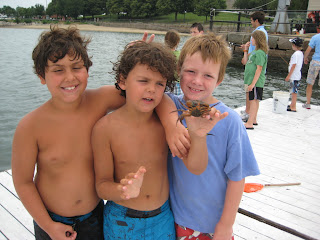 A couple of weeks ago at The McDonough Sailing Center I met a new friend. His name was Tim. This was the first time Tim ever went fishing so he asked me to take him over to the rocks with Conor and basically teach him how to cast a rod, properly line, and catch mussels. Tim was very excited about fishing and was surprised when he caught a crab shortly after he casted his line. Tim, Conor, and I had a blast. The same day we caught a fish but unexpectedly it fell off the line as we were reeling it up, which was a big disappointment. We were all looking forward to catching our first fish here, but no worries, we have big expectations for the rest of the summer.
The same evening a boy named Dillon came down to the docks and asked us to teach him to set up a crab trap with him. Personally, I didn’t know how, so I asked my coworker David to help. This was one of the highlights of working because I learned how to set up a crab trap. When we dropped the crab trap, we baited it up with turkey and several mussels, and shortly after we caught a huge crab. This was an interesting week.
at 1:58 PM