The End of a Great Week at Courageous! 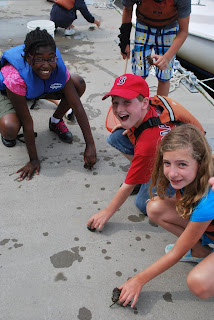 Hey Everybody! Last Thursday, July 15th, the kids at the Courageous Saling Center were pulling up lobster traps. All week we had caught many crabs and Sea Stars in the traps, but, ironically, we had not trapped any lobsters. It was lunchtime and the kids were pulling up the second trap. When the trap came out of the water, there was a large lobster. We didn't have a scale but we approximated that it was one and three quarters or two pounds. The kids were very excited about the lobster. However, a lot of the kids were very hesitant when it came to touching the lobster. These were the kids who had already overcame their fear of picking up crabs, but for some reason the lobster scared them a lot more. The lobster was a female and we taught the kids how to tell the difference. The lobster excited the kids in a way that I hadn't seen all week. Once the instant excitement had worn off, a couple go-getters walked over to the next trap. They quickly pulled it up and there was an even bigger lobster. This new lobster got the kids even more excited, which made it one of my favorite days at Courageous.
-Grant Baker
at 5:38 AM