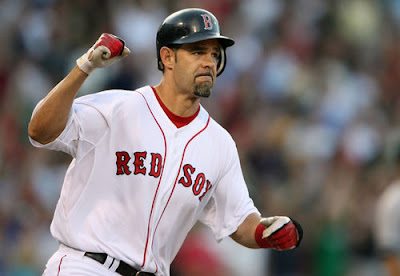 On Friday, July 22nd, due to the heat we set up a touch tank in the Children's Museum as opposed to fishing and crabbing outside. There were many youth groups in the museum who came up to our touch tank and learned about lobsters. However, not all of the kids we taught were from youth groups, some were just from families who came to visit the museum. One of these families was Mike Lowell, the former Red Sox 3rd baseman, World Series Champ etc. As Sheuli taught his kids about lobsters, I stood behind her trying to figure out whether or not this was actually Mike Lowell. Despite being an avid Red Sox fan, I was very confused about whether or not this was Mike Lowell for many reasons. First, I knew that he had retired and no longer lived in Boston. Second, he looks a lot bigger in person than he does on the field. Yet, my notions were confirmed later in the day when I heard two ladies pondering why Mike Lowell had been at the Children's Museum. Later that night Jerry Remy announced that Mike Lowell was visiting his old teammates, which erased any doubt in my mind. Although the we were not aware of it at the time, we had taught Mike Lowell's kids and broadened their experience about the Harbor.