Fishing in the Rain

This morning marked a drizzly finish to our first week of Fishing 101 at the Boston Children's Museum. Despite the weather, we were joined by a several determined young anglers eager to try their hands at fishing and crabbing. 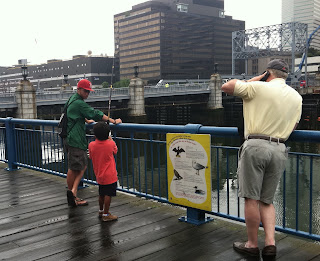 We didn't catch any fish, but we did find plenty of green crabs and spider crabs. One group of kids were hoping to catch a lobster and became very good at pulling up the heavy lobster trap (with a little help from Carolyn). After a few tries, they were excited to see a green crab come up in the trap. This particular crab gave Conor a bit of a hard time when he tried to remove it from the trap, but he eventually managed to get it into the touch tank without any serious finger injuries. The kids loved showing their parents how to identify a green crab and how to tell if it was a male or female. 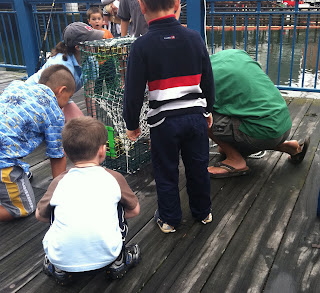 Along with the crabs, we managed to pull up some sea squirts from the bottom of the channel; the kids were so surprised to learn that they were actually living animals! Although crabs and sea squirts are a lot of fun, I'm hoping that next week we'll also be able to catch some fish.