First Catch of the Season 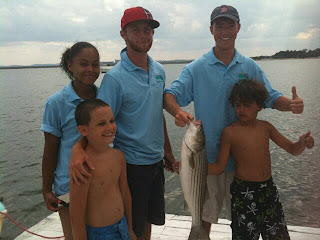 This summer at Harry McDonough Sailing Center in South Boston has been a ton of fun so far. I cannot believe that we are just a couple weeks into our program when already so much has happened. We have had a lot of success catching all kinds of crabs, from hermit crabs to red rock crabs, as well as other creatures like periwinkles, muscles, and clams. Yesterday seemed to be shaping up to be another great day, even though none of our explorers had catch a fish yet. Little did we know, the harbor explorers we’re in for a exciting surprise.

Just as the staff and I were beginning to wrap up for the day, one of our young anglers, Jacob, felt a sudden and heavy tug on his fishing rod! Conor and David were the first of the staff on the scene, as they managed to assist Jacob reel in his catch. When the fish was almost to the surface, we were able to catch the first glimpse of the large striped bass! Once it was reeled onto the deck, Conor was able to pull the lure safely out of the striper’s mouth. After posing for a few photos, the fish was grateful to be returned to Pleasure Bay. We measured the catch to be 27 inches, just an inch under being big enough to keep. Hopefully, yesterday’s success will be a good sign of things to come.