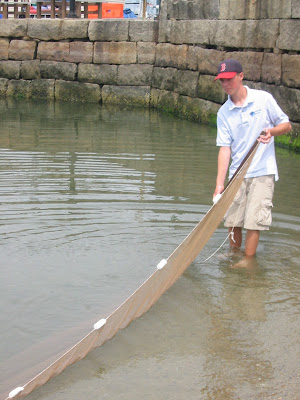 For those who do not know, I have been stationed in Southie for the past week. We are still working on catching fish (it is true that you can sort of count Thi's young sea robin that she caught). Mainly we have been catching various crustaceans with our crab traps. With great success, we have baited them with mussels and pulled up asian shore crabs and a few green crabs. However, tradgedy struck the McDonough Sailing Center when one of the two crab trabs fell into the brackish depths of the sugar bowl. It would appear that the knot on the crab line became undone, resulting in our young campers to pull up simply the line with no trap. The very next day, our other crab trap met a similar fate as a group of girls tried to shake seaweed off the trap. It tumbled into the water as we watched powerless. Now, sans crab trap, we decided that we needed to mount a recovery operation. Three brave girls lead by my intrepid friend Betty decided to swim from the shore to the spot of the suken trap. Despite the girls being strong swimmers, they were unable/unwilling to dive down and get the trap. The water proved to be rather murky, which complicated efforts, and deeper than everyone expected. Tommy and I attempted to direct them from the dock with limited success. Upon the girls suggestion I ran over to a sympathetic camper named Paddy, who volunteered his goggles for the rescue attempt. Still, the girls were unable to get the trap and had to doggie paddle to the steps. Taking matters into my own hands I jumped into the water, blindly feeling around the muddy bottom until my hand clutched the familiar metal. I truimphantly shot to the surface with my prize and we all swam a shore, having a good chuckle about our efforts.