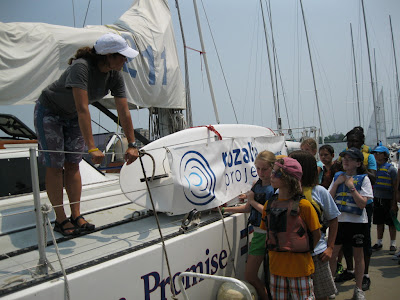 It was a fascinating week for the sailors, instructors, and Save the Harbor staffers at Courageous Sailing Center in Charlestown this week. The Rozalia Project, a initiative to rid our harbors of waste-- one piece of submerged trash at a time-- has been docked at Courageous all week. And with an underwater robot, sonar equipment, and underwater cameras on board, there's a definite buzz of excitement around the historic sailboat and the work that it's been doing all over the East Coast! 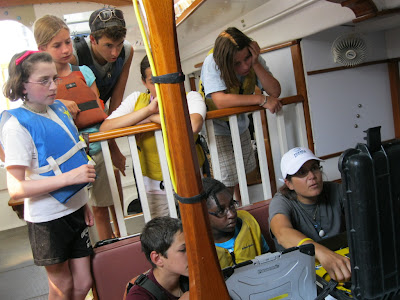 Rachael Miller and James Lyne, founders of the project, and their summer intern Sloan have been showing Charlestown's sailors around their "mothership" and searching the harbor floor around Pier 4 for trash to pull up to the surface and dispose of properly. Maneuvering a robotic ROV (Remotely Operated Vehicle) with a camera through the water and along the ocean floor, Rachael and James have pull up hundreds of pieces of trash along the East Coast. The Courageous sailors have helped search for "dark spots" on the sonar, keeping their eyes peeled on the underwater camera equipment for the masses ahead to materialize into bottles, cans, and pipes through the water and sediment. Then, Rachael or James controls the ROV to grab the piece of trash with its claw and come up to the surface, where the other is waiting with a net to rid the waters of that piece of waste!

We don't often think about how long our trash sticks around after we are done using it. We put it out on a curb, or throw it in a bin, and then it's off to a landfill, out of sight and out of mind. But if we throw it into the Harbor, Courageous's sailors (thanks to Rachael, James, and Sloan!) now know exactly how long it will stick around and be a hazard for our region's marine life: 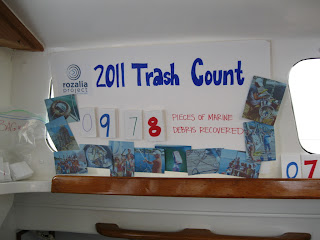 And those are simply the timelines for materials to get broken down enough to not be choking hazards-- but the materials themselves never actually disappear. So there are tiny plastics and wastes being eaten by marine creatures, many of which are eaten by humans. So, yes, the plastic water bottles and metal soda cans we dispose of are even making their way into the human diet over time. Gross!

The Rozalia Project is doing great things not only to physically clean up harbors around the region, but to shift mindsets and educate young people about proper disposal of wastes around our world's water systems. I know, because of Rachael, James, and Sloan, there are dozens of sailors and Save the Harbor staffers who are now even more conscious of their interactions with the marine environment in Boston-- and I wish the Rozalia crew the best of luck as they move on to other ports and affect even greater change! Thank you!

To find out even more about the Rozalia Project, visit www.rozaliaproject.org!