A New Home For Starfish 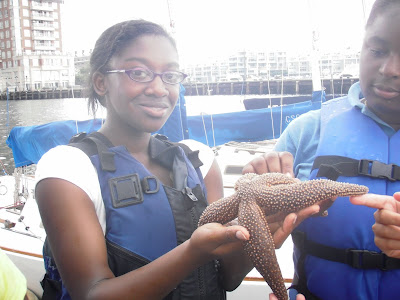 Courageous Sailing Center in Charlestown is a spot well known for catching different crabs and lobsters. But this week it seemed as though a new sea creature wanted to add itself to the list. Do to the fact that this sea creature is a new comer at the sailing center in Charlestown it really had to show up often to be on the list of well known catches. The starfish was definitely making a great effort since there was one caught almost everyday this week. Many of them were caught in our lobster traps and the kids were so shocked to find them in there. As soon as they saw one in the trap all they wanted to do was pick it up and let it get attached to them. Starfish are pretty rough on their tops, but soft on their bottoms. The kids were also fascinated by the way the starfish moved even though it moved kind of slow. One of the biggest starfish caught this week was caught by using a net attached to a broom stick. Senior Marine educator Sarah and one of the kids named Hazel came up with the idea to make the device in order to catch the big starfish that was stuck on the side of the pier. I had faith in them to catch it and they did! It was definitely the biggest starfish that I have ever seen. I hope that we catch more starfish in Charlestown in the weeks to come because they are definitely becoming one of the well known caught sea creatures.