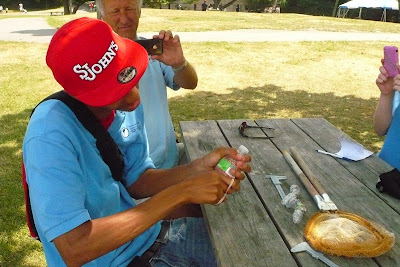 Last week, I got a chance to go on an All Access Boston Harbor trip to George’s Island. George’s Island is home to Fort Warren, a prison for Confederate soldiers during the Civil War. The morning of the trip, the Save the Harbor / Save the Bay staff managed to catch two lobsters off the dock of the Bank of America Pavilion! While one of the lobsters was quite small, its partner sure made up for it! The second lobster was a behemoth, one of the largest I have ever seen. The staff promptly placed the two lobsters into the touch tank, while some of the Senior Marine Educators showed the children how to tell the difference between a male and female lobster.

Finally, it was time for the trip! When we got to George’s Island, one group of SH/SB staff led the children around Fort Warren, while another small group stayed on the beach to teach the kids about marine organisms. This group was composed of Hughes, Tommy, and I. Although a few kids dropped by in the beginning, the next few hours were quite uneventful. So the beach crew decided to showcase our Save the Harbor pride by creating a sign in the sand using various and unique objects found on the beach. The sign was made up of rocks, wood chips, a juice box, a can of deodorant, and a few empty crab shells. The children and the rest of the staff alike were awestruck by the expansive sign reading “SAVE THE HARBOR”. All in all, I’d say it was a pretty productive day.