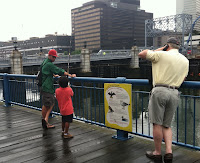 Last week I caught my first fish of the summer, a cunner or a bergall is a small fish that can frequently be found around the pylons in the Fort Point Channel. When we arrived at the Children's Museuem that morning, I was anxious to get on the board and catch my first fish that summer. I picked a spot that by the bridge on Congress Street and dropped my line down. Using a sinker with a small hook (the bait was sliced hot dogs), I bounced the hook off the sandy bottom around an old wooden pylon untill I felt a sharp tug. At once, I knew that I had caught a fish and pulled the rod up sharpley so that the hook would catch in its mouth. It was a small light brown fish that was fairly easy to pull in. Bergalls can grow up to a foot long but this little guy was closer to 8 inches. They are found all along the coast the coast from Maryland to the Bay of Islands in Canada. They are chiefly used by fishermen as bait fish but we let this one retrun to its habitat after letting a bunch of children on the boardwalk get a good look at it. They are not dangerous but they can prick your finger with their sharp dorsal fins, which they stick up when threatened. I hope to cath a few more of these guys and mad stripe bass!
Catch ya later,
Conor B. Newman
at 12:05 PM