Today, Save the Harbor/Save the Bay hosted the event Celebrity Fishing. Boat captains took us excited staff aboard to compete in a fishing competition. The person who caught the largest fish would win two third base line Red Sox Tickets for Monday nights game. This was my first time out on a boat fishing, and at first I was scared. I had a fear of falling over and not being able to swim myself to safety. 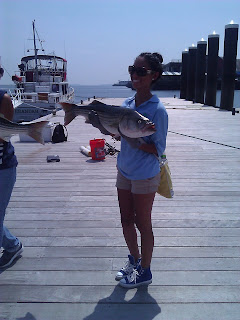 My overall focus was to hold on as tight as I could to prevent myself from falling over board. I had ignored the competition itself and underestimated myself. I thought there was no point in trying to reel in a fish bigger than 28" because I had no muscles. The boat ride was relaxing and I sat down watched Tom and Vin reel in fish. Neither of the fish the boys caught were large enough to keep.
I sat still with my sunglasses on admiring the beautiful Boston Harbor and the hot muggy weather when my Captain John yelled out to me to come give reeling a fish a try. I stood up with no self condifence in myself and mumbled "Do you really think I can reel it in? Isn't it heavy? I can't do it". I was given no pity in my unfit figure and had not choice but to begin reeling in.
I reeled in slowly and was lucky enough the fish did not come off the hook. Once I seen the fish I was speechless, this was my first catch! I was proud to say the first fish I ever caught was 35" long! :)
All along I had the strength to reel in this fish as long as me and I would have never caught or won this competition if it was not for John, my captain, enforcing me to reel the rod. My first fish got me two tickets to Monday nights Red Sox game on the third base line! WOOO! I'm so excited!
at 10:55 PM