Fun in the Sun at Pier's Park 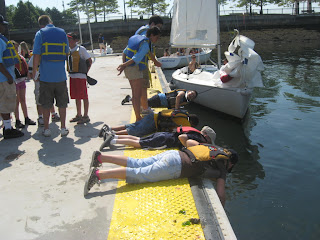 Week 1 @ Piers Park was a blast for the Harbor Explorers! Since we were afforded such beautiful weather for most of the week, we Harbor Explorers CRABBED, FISHED, and generally EXPLORED to our hearts' content!

On the side of the Pier's Park dock, we found a menagerie of sea creatures! Mussels, Tunicates, Sea Sponges and a variety of seaweeds were found in clusters below the waterline. Some of our explorers had never seen mussels, let alone Golden Star Tunicates, and were eager to learn more about the creatures that had been scooped up in their nets!

With our abundance of Mussels, the Harbor Explorers did a sizing activity, where we sorted the mussels by size (or into age classes). The Explorers thought of the way their parents measured THEIR height changes as they grew older. When the activity was finished, a long line of Mussels bordered the dock, ranging from tall to small. The explorers easily inferred that the smallest mussels were juveniles, and the largest adults. The Harbor Explorers were AMAZED by just how much a mussel could grow in its life cycle!

Some of the same mussels we found were used as bait in our crab traps. And SOOOOOOO many crabs were caught! Invasive Green crabs were found in abundance along with local Red Rock crabs and Jonah crabs. The Harbor explorers were taught how to identify the crabs to species, then determine whether they were male or female. Before long, all of the explorers knew what kind of crab they'd pulled up, before it was out of the trap!

By the end of our days at Pier's Park, all our explorers were thoroughly covered in sea creatures! This week was a blast, and we found so many new creatures.

I wonder what we'll find in our traps and on our lines next week!