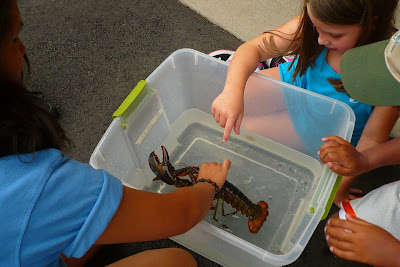 Hey all! Last week not only seemed to be a busy week for myself, but everyone seemed to have an eventful few days considering the hot weather. On Tuesday I participated in the Friends of Wollaston Beach's "Dancing in the Park" with a couple of other friends from Save the Harbor. Although we did arrive a little unorganized (we searched the beach for literally anything to put on display; we even resorted to seaweed and bird feathers!) nevertheless we had a great time and children learned a lot about the marine environments around them.

The lobster touch tank was a hit, and I even learned a lot about lobsters myself! It was so funny to see small children overcome their fears to actually pet a lobster up close (many of the kids saying that they usually only see lobsters at the supermarkets). The smaller items that we had on display, such as clam and mussel shells, feathers, seaweed, and other small marine life, were also a big hit. It is pretty interesting how we take for granted biological wonders that we sometimes pass off as trivial; I was surprised to see how many people could not distinguish a clam from a mussel shell. Therefore, while examining shorelines, catching fish, or exploring any other maritime area, I will always examine anything I find; who knows, I might learn something new!


As for McDonough Sailing Center, it was really hot! Luckily, the kids were begging me to go swimming with them; how could I refuse the beautiful ocean on such a hot day (102 degrees to be exact) ? Little did I know that once I got in the water, the campers were planning to launch a water war on me. So, after a little while of swimming, and a little crabbing, and some fishing thrown in there as well, I was able to call it a week.