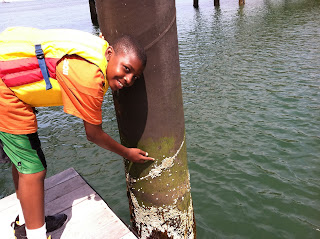 This is Henry, one of the members of the fishing club at Camp Harbor View. When he first came to fishing club yesterday, Henry took one look into the bucket of mussels that we were using for bait and declared that he would not be touching any sea creatures of any kind. No mussels, no crabs, no worms, nothing! They were "nasty" and he wanted nothing to do with them.

Today after some discussion and encouragement, Henry took a big step in overcoming his fear and touched his very first sea creature, a barnacle! Shortly after that he gathered up the courage to touch the back of a red rock crab.

After fishing club, Henry joined us again this afternoon for some tide-pooling. Although he was tentative at first, with the help of a sufficiently long stick he was soon having a blast flipping over rocks to find Asian Shore Crabs. He and his friends discovered that the most crabs could be found under big rocks closer to the water.

Near the end of the day, I found Henry next to a small tide pool debating whether or not he was going to pick up a periwinkle. I told him that if he did it, I would take a picture of him with the snail and put it on our website. This proved to be the motivation he needed! 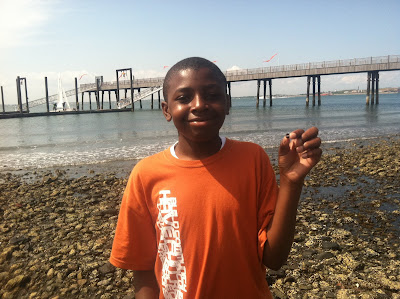 The face says it all! Congratulations Henry!