Hey! Guess who I saw

This Thursday was like no other and not just because it was more windy then the usual that morning but because I got to do something new.

It was my first day being part of All Access and I was really excited. I was going to a new site and I wondered what it was going to be like? What do they do first? What do they do at all access? I kept thinking to myself. That's when I found out that the famous David Coffin was located at the that site. What makes him so famous you might ask? Well, I'll tell you! He has the legand of throwing and dumping people into the bay.  It's somewhat evil but the intentions aren't evil. Before you know it if you do not watch out for your back (literally) he will come behind you and dump you right into the water.

Imagine my surprise when I heard that. However, today was special. Not only because today there was about 500 children but because of something a little more different than the amount of children going to the island.

David tells people before we go off to do something new, to take advantage of the free oppertunity. At first I thought there really wasn't much you could do that is completely new or couldn't do at home so I disregarded the comment.

But then I fount out that Governor Deval Patrick was going to be at Peddock Island! Who would have guessed. That's when I decided that my mission for the day was to take a selfie with the governor. As soon as the governor was set and ready after the small speech, I extended my hand, introduced myself, and asked for a selfie. Before I knew it David was right there. And that was  my something new to do, I got my selfie with Governor Deval Patrick! 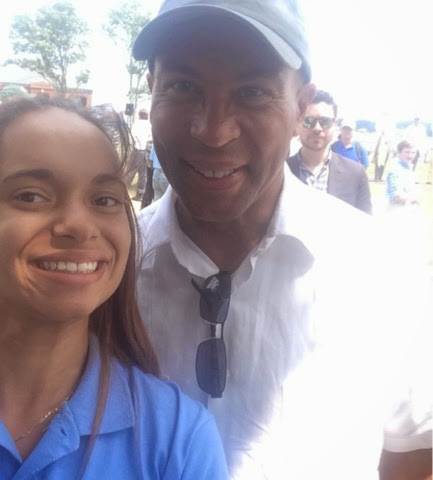