My name is Che. I go to Excel Academy Charter High School in East Boston. I play basketball both on my school team and outside of school I play on an AAU team. Besides basketball, fishing is also really fun and I always have a fun time waiting and hoping a fish gets hooked on to my rod. The excitement when the fish does hook on is amazing. 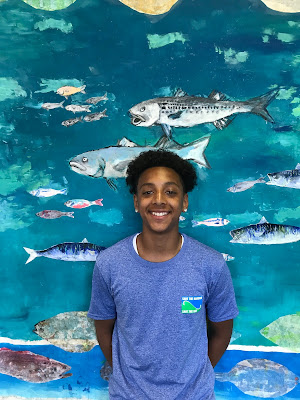 I live in Charlestown and I am glad to be part of Save the Harbor. I grew up in Boston all my life and I always had a good time near the water and harbor. During orientation, I learned so much about the harbor, it was amazing how hard the community worked to clean up the harbor. We learned that the Boston Harbor was the dirtiest harbor until we came to a realization that this is hurting the water animals and also us. Then we made a lot of technology that helped us clean the harbor. We burned all the trash we threw into the water and once all of it burned we started fresh and made sure to keep our harbor clean. Now after all of our hard work, the Boston Harbor is one of the cleanest harbors in the country.

The marine animals such as fish in the harbor are very nice, each fish has their own type of look, the weirdest looking one that kind of freaked me out was the skate, it had human-like eyes and it curled into a ball which was kind of weird. We also learned about the Black-striped sea bass and that they are overfished, so if you do catch one you should put it back because if we do keep fishing them they will become extinct. But if we let them live there won't just be a lot more, they will also keep getting bigger over time.

All 3 days of orientation were very fun but I liked the fishing part on the second day the most. It was good seeing everybody patiently waiting for a fish to hook on and their faces, when they did catch one, was priceless. They had so much joy on their face. Although I didn't catch a fish, I had a lot of fun waiting for a fish and hanging out with my peers. I had a good time talking to everyone and getting the opportunity to get to know everybody.