Best of the Best 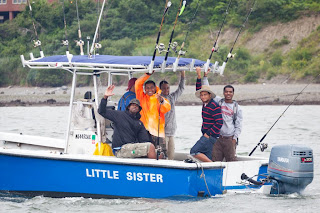 The annual fishing derby this year like every other year was a blast. The day was gloomy and started off slow but there was one simple thing that we all wanted to accomplish and that was to catch a fish. See fishing with Captain Joseph was the best highlight of my day due to the slow start and undeniable end of not catch a fish. Need to say I did catch a Skate, even though it is not actually a fish it is a cartilaginous fish belonging to the Rajidae family. Even though this year was slow it was fun bringing my friend Lionel Olivera out to fish for his first time and Andys older brother Gian Gonzalez. They had a lot of fun, Gian caught a skate which was awesome because so did I mine was male his was female. Captain Joseph kept us laughing the whole time with his keen sense of humor and constant slick remarks he had such character to himself. All was great for a rainy day.

The skates really made me happy, the stripped bass on the dock at the end were also collasal! Wills flounder which won him the derby was nice. It was a great day and to spend it with my coworkers was amazing!