Hey, everybody, it's Kiauna aka Kiki again!
Spectacle Island was so much fun. Although it was blazing hot outside, we made the best out of it. The kids didn't seem to think it was too hot to play a fun game of kickball. After everyone slowly but surely made their way down to the beach, even those who swore they weren't going in the water, eventually got in to cool off. 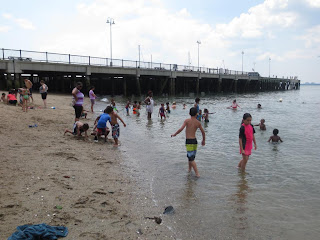 Everyday we aim to do at least one thing we've never done before and I swam at Spectacle Island for the first time. I had to cool off after kickball. One little girl was afraid to get in, so, naturally, I encouraged her to at least get her feet wet. My Lead Explorer, Carolyn, was nice and gave the girl a piggyback ride into the water. It was cute. We tossed around a ball, splashed a bit, and had fun. I'm not sure who enjoyed themselves more; the kids or us! Speaking for myself, I have to say, it was a great day! I got to know lots of different kids. The only downside of being at Spectacle Island is how little time we have. You know what they say.."time flies when you're having fun!"