What's up, guys? Kiauna here.
Today was quite an enlightening day at Courageous Sailing. Another JPA, Amhed, taught the kids lots of fun facts about crabs. The kids were really smart. They knew all about what kinds of crabs live in the water. From Green Crabs to Red Rock Crabs. They knew it all. I wasn't very surprised that they were pretty familiar with Mr. Krabs, from Spongebob. 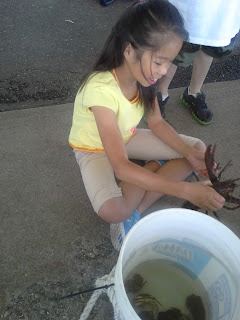 After we had great conversation about crabs, the kids got to hold a few. They even got to see a lobster! For some of them it was for the first time so they were kind of nervous. Most of them were brave and held it. They sure are braver than I am! Especially Emily. She held it twice!

It wouldn't have been Save The Harbor style if we didn't do something with frisbees. Of course we played a game with an official STH frisbee. Ahmed and I walked to the field and set forth in our game. He had a system where he threw the frisbee and the person who caught it had to tell a fun fact that they knew about a sea creature. Supposedly a shark is likely to watch me undress. I'm not sure how much truth there is to that theory but, hey! We did not discriminate about what kinds of facts were thrown into the mix.

Ps. Shoutout to Bruce Berman. I know how much he enjoys reading about frisbees
Pps. Ahmed and I did all of the above while drinking milkshakes. McDonough may have sully's but look out! Tedeschi's is catching up! That is a big bonus about being at Courageous. Tedeschi's now has a smoothie/milkshake maker!