This blog is definitely not about playing kickball and Frisbee on Georges Island........


This week on Georges Island, we spent a great day full of sports outside the tunnel. Davis, Manny and I took Braintree After School enrichment programs children onto the open fields and made sure they had a fun time. I ran kickball as usual with my ultimate dynamic teams and Davis ran Frisbee. The children were all 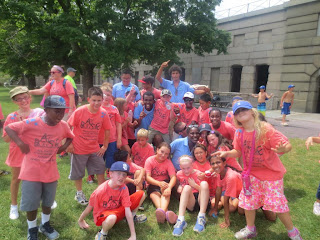 enthusiastic to play kickball and most kids were already very athletic, Davis also know as Mr. Sullivan knew some of the kids and the ones he knew were great sports. My team captain Matt, was an awesome captain we had the all start team. We had several all stars and the ultimate outcome was Matt and I team dominating against Anicias team. It was hysterical how competitive the kids were over something not so big but they had the best spirit! It was all fun and a great day my best day on Georges so far. Matt was an MVP so I named him KD also because of his Kevin Durant hat, plus my MVP D-Rose he was a champ.

Remember this was not a blog about our day playing kickball and Frisbee on Georges Island..
Over and Out