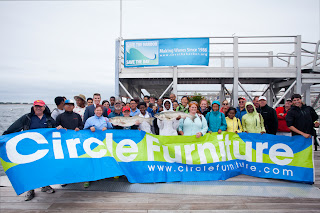 Yesterday was a good day out on to go on a fishing trip. Even though it was a cold day and colder on the water I was still excited to fish. It was about 60 degrees out on the water, so the only thing to do in order to stay warm was be active. The people on my boat, The Belle, were definitely staying active and still wanted to catch some fish. We all tried our best to not think about the weather and focus on catching fish. Captain Charlie an Bruce Berman knew where all the good spots in the harbor were and they had no doubts about us catching fish. As Bruce would say we were out there to go "catching not fishing." 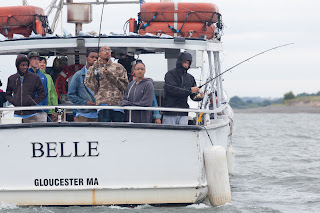 At the start of our trip things seemed a little slow because it took a while for someone on the boat to catch the first fish. Jack, Will Conroy's little brother, was the first one on our boat to catch a fish and he caught a Black Sea Bass. He got the ball rolling for our boat and we all began to catch fish from there. It seemed as though every 10 minutes someone on the boat was catching a fish. Almost every spot that we stopped at someone caught a fish. Everyone on the boat caught either a Black Sea Bass, Skate or Flounder and no one went back to the dock saying they did not catch anything.

Overall, the team on The Belle was definitely the best of the day due to the fact that we caught 30 fish! The numbers: 22 Black Sea Bass, 7 Skates and a flounder. The 7 skates that we caught were caught in 15 minutes and made us all feel like professional anglers. A cold day out on Boston Harbor turned into a catching day that I will not forget. 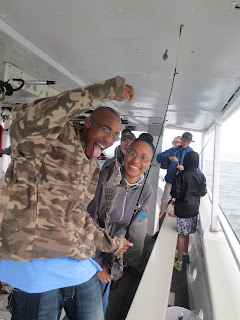