Last Thursday the Save the Harbor/Save the Bay summer staff participated in the 3rd Annual Fan Pier Fishing Invitational despite the cold, rainy weather!  Everyone arrived to Fan Pier by 7:30am, where they ate donuts, loaded up on hot coffee and headed to the pier to choose their boat for the morning!


This year the fishing invitational was extra special because each Junior Program Assistant was allowed to bring a guest; a parent or guardian, friend or family member.  Unfortunately, many guests were not able to come due to work obligations but of the ones that fished, we knew they had a blast!  Will Conroy brought along his little brother, Jack, who was a fish-catching machine.  Monique invited her friend Dali, while Will Clark's girlfriend hoped to catch more fish than him!  I was lucky to have Karrisha and Anicia's Mom, Marlene, in my boat, while Ahmed and Andy filled their boat with friends and Andy's brother.  Vinh rounded out the guest list with a fellow O'Bryant graduate, Jean. 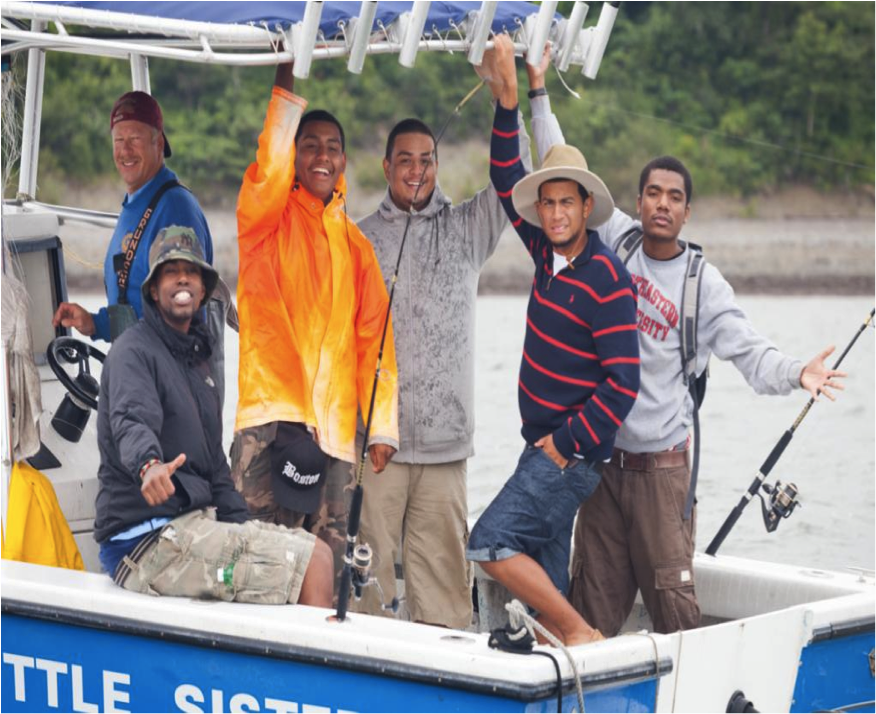 Even Bruce and the Senior Marine Educators joined in on the fun!

As the fishing boats headed back to Fan Pier, everyone was excited to see who caught the biggest fish.  Although some groups had a tough day resulting in zero fish, Vinh caught a 22 inch striped bass and Will Conroy a 15 inch flounder.  Many JPA's on The Belle caught black sea bass but they had to be thrown back just like Vinh's striper because they were not regulation size.  However when it came time to award the fishing prizes, Vinh, Will Conroy's brother, Jennifer and Hung walked away from the invitational with brand new fishing rods from Fishing Fanatics!

Everyone had a wonderful time fishing in the harbor but this day would not have been possible with out the help of many.  We would like to thank Joe Fallon and Fan Pier for hosting the event and Circle Furniture, Russo Marine and 3A Marine for sponsoring the invitational.  No one would have been able to even get out on the harbor without the different boats and captains that volunteered their Thursday morning to hang out with us - especially Rick and Steve of The Reel Pursuit which I had the privilege to fish on.

But wait, where did those stripers come from?  Sometimes when the biggest fish you catch is a 15 inch flounder, you need to improvise for a group photo.  Thank you Mike Fallon for the stripers! As soon as the photos were taken Tom went to work on fileting the fish.  Who doesn't love fresh fish for dinner?!

Big plans are already in the works for next year.  I will win the invitational.  Mark my word!