What a busy week it's been!  After all the preparation and meetings, the 2013 youth programs officially started on Monday -- and what a great first week it was!

Monday was spent in the office, making sure that everything was ready to go on Tuesday for the first day of All Access.  The first week was spent at Georges Island, the infamous home of the Lady in Black.  The dark tunnel was a very popular destination, as it is every year, but this year the team has added some new attractions for our groups.  Senior Marine Educator Davis has brought wiffleball and kickball to the Islands and has had great success so far -- the Junior Program assistants have proven their skills on the wiffleball diamond and the kickball field has already seen some nail-biting finishes to games.


Another new addition to AABH is fishing from the docks -- seasoned staffer Thi Tran led children from different groups to explore the waters around Georges and hopefully reel in a big fish!  No luck this week, but we still have the rest of the summer to catch something. 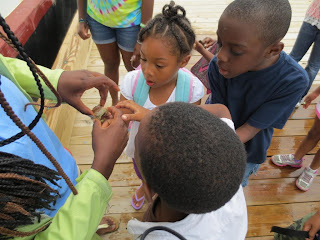 The beginning of the summer programs is always a little hectic, but I think that overall it went great!  I've always been a little partial to Spectacle Island because of the great sea glass, but this week at Georges was awesome.  I'm proud to report that my wiffleball skills have improved since middle school and Ahmed dubbed me Carolyn "Home Run Slugger" Burkett.  Hopefully I'll continue to live up to my new nickname!

See you out on the water Harbor Explorers!