This year's fishing tournament was on an extremely hot and humid day. Temperatures hit the mid-nineties, and the air was so thick that you could see it hovering over the wavy Boston Harbor. People were sweating through their shirts at the early morning breakfast, so it was a great relief being able to flee from the muggy, crowded city and cruise around on the breezy open seas. Myself and a few co-workers were assigned to Captain Ronny's vessel, which ended up being one of the more successful fishing boats of the day. 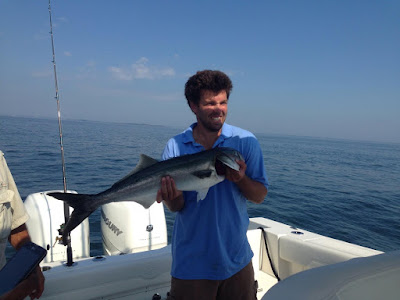 There were many boats at the tournament, all captained by different men with various strategies for fishing. Some ships went bottom fishing with the intent of catching flounder, scup, and black sea bass. Others went fishing for stripers, first catching a bait fish, like a pogie, and then using that for fish food, hoping that a healthy striper would swim by and take a bite. A couple other boats, mine included, went further out into the ocean, past Boston Light, so far away that the city skyline was barely visible through the haze. We were interested in catching the big fish, the game fish: bluefish! I'd never been blue fishing before, but I had heard plenty about it: the strength of the fish, leaving the arms sore after a battle; the will of the fish, never tiring and always persistent in escape; and the teeth of the fish, razor sharp and able to easily snatch a finger.

We never used a compass or a map to find the hot fishing spots, but instead, looked at the horizon, where winged creatures soar. We weren't staring at the sky's beauty or the endless sea, but instead, searching for flocks of seabirds. Where there were birds, there were fish, and almost immediately after floating by Boston's last lighthouse, we hit the jackpot. There were cawing gulls and jumping bluefish everywhere! We used lures specifically made for this species, and on the first cast we had a hit, then the second, the the third, and continuously for about an hour we were battling blues. At the end of the day, we pulled in five big bluefish, the biggest being about 40 inches, and when the birds and fish eventually disappeared, we enjoyed the fresh sea air and each other's company. Captain Ronny taught me about the boat's controls, and our fishing expert, Mike, shared stories about his most epic fishing ventures.

What a day! Thanks to all the sponsors and donors for providing us with this unbelievable day. I can't wait for next year's tournament!