This is one of the following phrases after the captain says "Captains Coming." This is a game that I play at school with my orientation groups. At Stonehill College I serve as one of the many Peer Mentors, the individuals who serve and organize orientation for the numerous incoming freshmen, and this is one of my many favorite games to play. 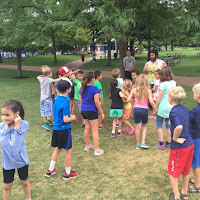 It was almost nostalgic to play this game this past weekend at Piers Park. The game is a rendition of the infamous Simon Say's. It carries a heavy nautical theme that allows our children to feel closer to the harbor. It consists of a Captain who says phrases that range from Mermaid (the kids fall to the ground and act as mermaids in groups of three) to swab the deck. 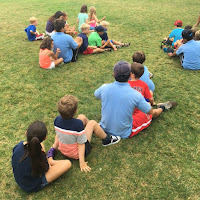 It is so amazing to watch and though it sounds fairly easy, please do not be fooled, especially in this time of Olympic prestige the game gets quite competitive if I do say so myself.

Enjoy these photos of our staff and group(s) playing Captains Coming.
-Ahmed