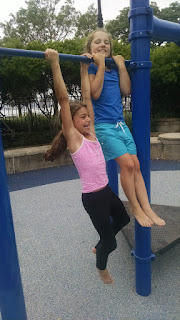 I always knew that girls were strong, but I saw it first hand at Piers Park. It all started by me asking one girl if she could do a pull-up. Without any problem or difficulty she did it. After, more girls started to come to where we were, so I thought that it would be good to have a pull-up, push-up, and sit-up contest with them. They all agreed and so we started the contest. First, they had to do a regular pull-up and a side wall pull-up. They all did it. Some of them struggled and others did it like nothing. When it came to the push-up part, it was one girl at a time to see who could do the most. The first girl did twenty four, the second one did twenty six, the others did more than ten until one did thirty six. That was the highest number of push-ups, none of the girls could beat it. When the time for the sit-ups came, they were all tired but still wanted to do it. The maximum number of sit-ups was forty six. While all this was happening, boys started to come over too, but every time we asked them if they wanted to participate they left and started to play with the water or just said no and kept on watching the girls doing exercise.