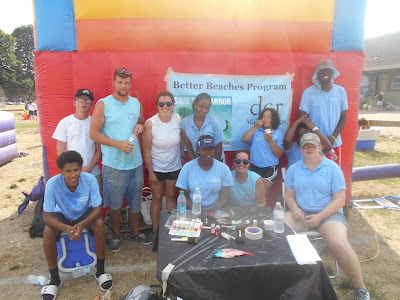 Hey guys! This past Thursday, the South Boston Neighborhood House hosted an event at Moakley Park called OlliePalooza. This was a fun free event for anyone to come to. They offered free hot dogs, popcorn, slush, water, water balloon games, moon bouncing, a DJ for dancing, an inflatable GaGa Ball arena, and much more. We were invited to set up a fish printing table, and to assist the pirate Mary Read with her stories about the Boston Harbor.

We set up the table in the shade of one of the giant moon bounces, as Thursday was one of the hottest days we have had this summer. Fact: children and families are likely to come visit your table if you are in the shade rather than in the sun on a day like that. We were using sea bass instead of flounder, which was new for me. I was unsure at first because these fish were significantly smaller than the flounder we have been using all summer. However, smaller doesn't necessarily mean worse. The fish prints came out beautifully on the t shirts we were using, and our visitors had a great time choosing their colors and making multicolored fish prints. I have to say though, one of the best moments of the day was when one of the teachers at the Ollie Preschool thought we were doing face painting, and I said "No, Ms. Cathy. Fish printing." And she looked and saw a real fish on the table and actually squealed in disgust. It was hilarious.

I also loved capturing the looks of interest, intrigue and excitement on the faces of children who stopped to hear some stories from Nora Dooley .. I mean Mary Read the pirate. They had so many questions for her, and listened so intently, that they were able to answer any questions she had at the end when she quizzed them on her information. Aside from the heat, OlliePalooza was another successful better beaches event that I am thankful we got to be a part of! 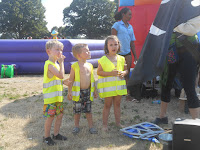 See you at the beach!
Bridget