Hey everyone, Jahari here again! So this past Friday me and all of my, coworkers, and some kids had a fishing Tournament. We had separate teams and also had our own boats for each team. The team I was with Chris, Carlos, and Christen, plus a few kids from the South Boston Neighborhood House. We had big help from the captain of the boat and a guy named Sam that use to work at Save The Harbor Save The Bay. For bait we used sea worms which I had never seen before so they looked really cool to me. But also REALLY NASTY! I didn't get used to touching them so I didn't touch them much. I had my coworkers help me put the worms on the hook! My team caught most of the fish and we were one of the teams that won the tournament! It was a great day on the harbor. 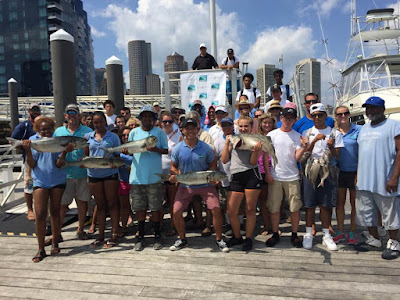