A beautiful day to explore

Yesterday we all had the pleasure of taking a break from our normal routine, and participating in the annual Staff Day. We ventured out to Spectacle Island, which is merely a short hop skip and jump away from Boston. The island itself has been through a lot throughout the years (see: Spectacle Island history via Google), but its past has made it into the beautiful treasure it is today. There are two large hills (called North and South Drumlin), connected by a skinnier portion.

I had visited the island once before, but I hadn't gotten the chance to explore much. So, my coworker, Grace, and I set of to see as much of the island as we could before lunch. We wandered around the winding path that goes around the base of the North Drumlin, and came to the flatter area that connects the two drumlins. Being on a time crunch, we decided to venture to the South Drumlin summit, which was at a slightly smaller elevation than the North Drumlin. After capturing a few pictures, we ended our time exploring, and moved on to a new activity.

Grace and I had been lucky enough to snag the last two spots available for a free kayaking venture. I had been kayaking before, but never in a sit-in kayak, and never with a view as beautiful as the one we had. 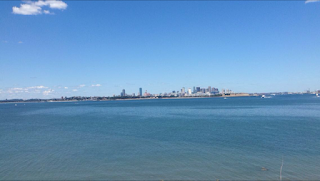 After kayaking, we enjoyed some lunch and stuck our feet in the sand for a quick minute before catching the ferry back to Long Wharf. It was a beautiful day full of new experiences, and I was thrilled to have taken part.