Nothing but Good times

This past Saturday I volunteered at the Harbor Illumination event at Hull's Lifesaving Museum! I rarely travel out of Boston and to go to Rhode Island for fish printing and some fresh Del's lemonade, it was awesome! With cool breezes occasionally coming by the temperature was just right! In the middle of the field where we were set up, there were a small band of kids chasing bubbles and dancing to the festive jams. In the midst of the event, I couldn't help but dance along myself to the goofy guys running a show for the kids. 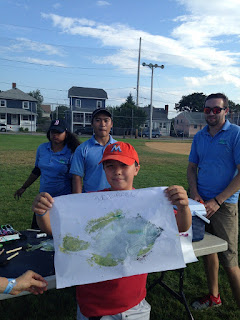 Throughout the next couple of days, we were finally seeing a shift in gears in the number of fish caught weekly! We were averaging two to three fish a day during the first half of the week! We had yet to catch anything besides a squid on our hooks so far, however the crab traps have shown us time after time why they are one of the kid's favorite activities. We had two flounders about four to five inches in length, just about the perfect sized for the kids to hold in their hands briefly and another species of fish which we (at Pier's Park) have yet to identify. 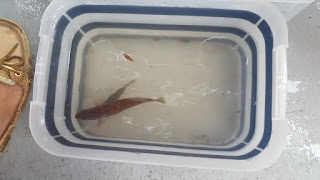 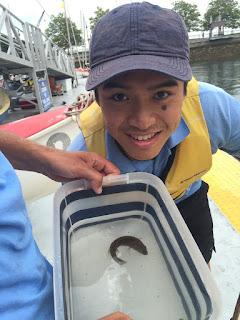