Hey Guys,
So we all know that staff day was Monday, and we all know how fun it was. But I think one of the best things about staff day was playing Ultimate Frisbee, well not really. It was more like "throw the frisbee around in a circle and lets see if we can catch it". Either way it was still a lot of fun. The best part was seeing Kharliyah come so close to catching a Frisbee but not quite close enough. Somehow we got on to counting how many people could catch the Frisbee. We got all the way up to 24! But no further. It took us almost half an hour just to get up to 20. The motivation being that we could only eat lunch once we reached 30. And for some reason we had decided to play on a hill so of course we 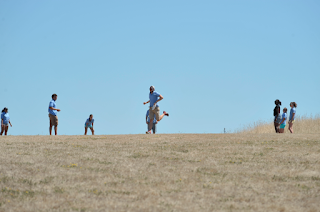 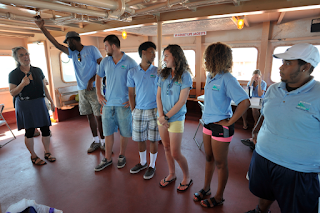 were struggling a little bit to even throw the Frisbee well enough for someone to catch it. It was honestly a lot of fun, which says a lot coming from someone who does not play much frisbee. I only wish that we had been able to get all the way up to 30, but that was not all that happened on Staff day. On the boat, the Ptown 2, I was one of the people to tell a story. I decided to go with when I had dropped my phone in the Harbor at Piers Park. That tragic story may not have been my best story, but it was the best I could come up with.
Wow, we look amazing caught off guard. I gotta say that I really liked Andrea's story about the lobster trap. I couldn't believe that they had so many people helping to pull up a trap and they couldn't even pull it up! Or Ahmed's story about how "Save the Harbor" "Saves the dogs". It was stories like those which made me wish I had a better story to tell. Oh well, Until next time!
Amanda
at 5:59 PM