Today was my first time out at Spectacle Island for staff day! In the morning, we all met at the pier and boarded the ferry to get out to the Harbor Islands. From there, we disembarked at Spectacle Island. I had learned a few things about the island before I arrived, like that it used to be a landfill and that the trash on the island burned for ten years before Spectacle was transformed into a park. I have to say, after seeing how beautiful the island was on that day, it's hard to believe that it was once covered in trash! 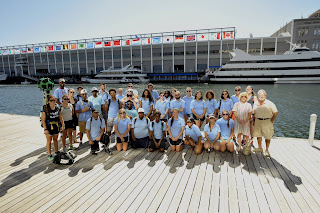 The staff on the pier before we got on the boat

After we arrived, I went on a hike with Jessie, another SHE, around the island. It was great to see all the spectacular views of Boston and the other islands during the hike. When we returned from the hike, we had the chance to go kayaking in the ocean off the island. I had never been sea kayaking before, and it was a lot of fun! The water looked fairly calm from the shore, but there were actually more waves than I expected once we got out there. I was slightly afraid of flipping over, but I ended up staying afloat! After kayaking, we went back to eat lunch and stick our feet in the refreshing water. Overall, it was a fun day, and I hope I get to go back to Spectacle Island again soon! 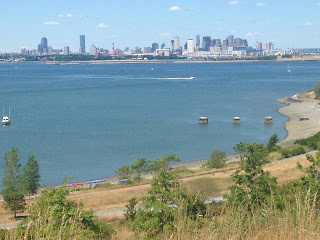 A great view of Boston from our hike around the island