Just the other day at Piers Park, we were pleasantly surprised to find lobsters in our crab traps! There were two lobsters in total. One of them was fairly small, definitely not fully grown, and the other was larger and big enough for us to keep, if we so pleased. Everyone on site, Harbor Explorers and sailors alike, were amazed at our most recent catch. I'd never caught a real, live, wild lobster before, and like everyone else, I was unsure of how they would react to their current predicament. 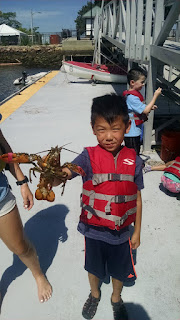 We opened the crab trap and carefully slid them onto the dock. There, we met our first challenge: the claws! Thankfully, we were prepared and had elastic bands in our tackle box. The smaller lobster was very cooperative, barely moving, and it's claws were also a bit littler, allowing for the elastics to slip on easily. The other crab was more predominant, and much stronger than it's partner. When I held it's claws, it clearly resisted, pushing it's arm stubbornly away from mine. It's larger hands worked as a team, in synchronization, following my fingers around as I attempted to shut it's pinchers. After some toil, the deed was did, and the lobsters were placed safely into their touch tanks. 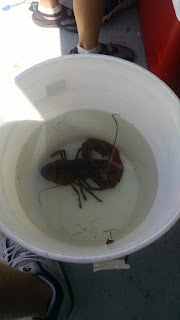 Their antennas stretched from their heads to the water's surface, where they rested on top of the liquid. These antennas were super perceptive, and reacted to anything that touched their surroundings. If even just a fingertip dipped into the water, the lobsters would immediately begin to scurry around their enclosures with their claws waving above them. This tactic was very intimidating, and scared many of the kids from wanting to hold them.

The thing that surprised most of the children was the way that the lobsters used their tails. The more dominant lobster, who continuously acted in defiance of us, once had a bit of a fit on the dock, where it flapped it's tail and flopped on the dock, very similarly to how a fish would if it were taken out of water. It's tail was powerful, and we saw this strength more clearly when we eventually let our critters free and placed them back into the ocean. The more docile lobster floated innocently to the sea's bottom, as relaxed as it had been in it's whole tenure with us. Our alpha friend, however, left in style. It hit the water, danced for a moment, and then thrusted it's tail and zoomed away from us. It used it's tail very similarly to how the squid that we captured used it's tentacles: by pushing the water in violent blasts, so that it shot away like a torpedo through the water.

Yes, we even let the monster lobster go free and back to it's home. At the time, I thought that it was a good idea, but around dinnertime, a smidge of regret passed through me. I don't like most seafood, but I do love lobster.