Last week on Thursday, August 11th, I had rushed back to Boston from the Capes to make this huge fishing trip on various boats! I slept whenever I could on my commute back to Boston and I fantasized about the huge fish I would come across. Not long after I arrived, everyone was split up with an assigned group led by boat Captains who would take us out to fish with the hopes of landing any large sea creature that could take the spot as the "largest catch!" I ended up on a small boat that was able to coast along the edges of water just a few feet above sand led by John and Al. I learned that these guys were from the Brighton area themselves and when they started telling me about their fishing experiences, I knew without a doubt that I was in good hands. It was unfortunate to hear that by the time we had reached John's Striped Bass hot spot that the tide was too low and that the larger fish probably left. Minutes had barely passed by when we snagged our first fish, a Striped Bass! He was roughly 26 inches, to small to keep. 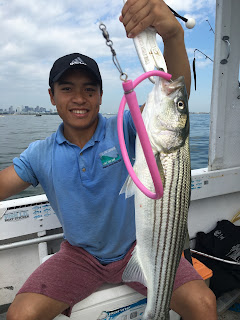 John and Al were telling me techniques to snagging Striped Bass and Blue fish! Things like making sure to troll the fishing rods to attract fish that are primarily surface and medium depth water feeders like the Blue fish and Striped Bass! We made sure to constantly use fresh bait and soon enough we landed our second Striped Bass. Then we got the call. Immediately our boat pushed past a few islands to be around "Graves" and "B.G." code names for areas in the harbor/ sea where these fisherman have nicknamed. We were now on a hunt for Blue Fish and we had arrived to the party late. We still managed to snag a huge bluefish that both John and Al had to wrestle into the boat! 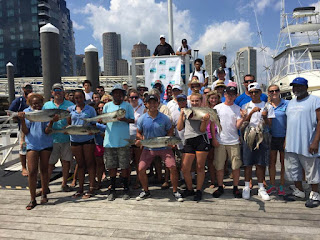