Over the past few weeks that I've been at Carson Beach, I've been really working on how to improve the athlete side of me. Catching footballs is one thing, and throwing them is a different game. I almost never catch the ball standing up, but for me, sitting down is a different story. Catching the football seems so much easier while sitting down (I don't know why but it just makes it easier for me!). Sometimes Joe or Preston would call "hands!" to Bridget and the best is when she has one hand holding her coffee while shielding herself with the other hand (sorry Bridget but it was funny). We have all learned that coffee is the one thing Bridget will not drop for the hands game. It is her morning priority! Recently however, Bridget has started to be able to catch with one hand, which is amazing, while I haven't progressed at all unfortunately, here's a picture of Preston with his hop game on point. 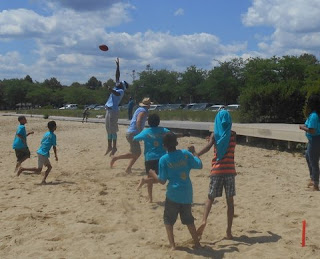 Now the 'hands' game at the beginning wasn't too bad the warnings were given before the person threw the ball in many cases would be Preston, however throughout the few weeks I've been at Carson things got a bit more extreme with Joe joining in. Now the warnings were given right before the ball hit you which was hilarious when the person receiving the ball couldn't catch it with the small amount of time given to them, but when they do catch it, it was amazing especially when the person receiving caught the ball with one hand which was what Bridget has been doing lately. In the end I'm still bad at catching, I still don't know how to throw a football correctly and the same goes for frisbee, but that's a different story.