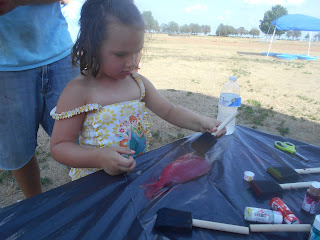 On Thursday, some of the staff and I took part in a fun event across from Carson beach, called Olliepalooza. Between fish printing, free slushies, and moon bounces left and right, if you didn't have fun I feel bad for you. The day started out with a few of us fish printing. But instead of putting them on paper, we started to print them on shirts. I think it was a good idea to print them on t-shirts since it was so hot. Besides the heat, no one ever fish prints on t shirts. I'm sort of glad Save the Harbor thought of it first. They came out pretty good and the children loved that they could wear their art home.

After stuffing my face with what seemed to be the sixth slushie, I went over to relive my childhood in one of the moon bounces. I hopped in the moon bounce with Maruicio and to our surprise, it was a race. The two of us took off as a child screamed "ready, set go!" As we took off in the moon bounce. All I saw were kids on the outside racing us from there, trying to see who reached the finish line first. As I came out of the moon bounce victorious. I celebrated by playing GaGa ball. A game where you hit the ball at somones legs in order to get them out. It was my first time playing so of course I was a main target for the kids. I lost the first game, but ended up winning the next one. I had a fun time at Olliepalooza, and hope that its here next year by popular demand. Until next time, and keep on exploring. Preston. 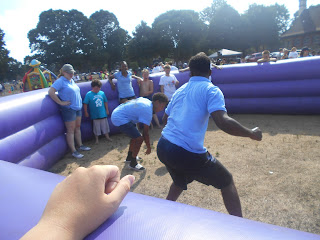 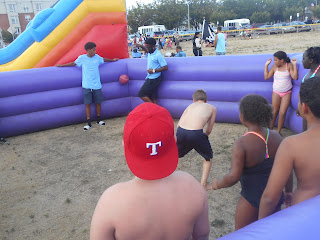